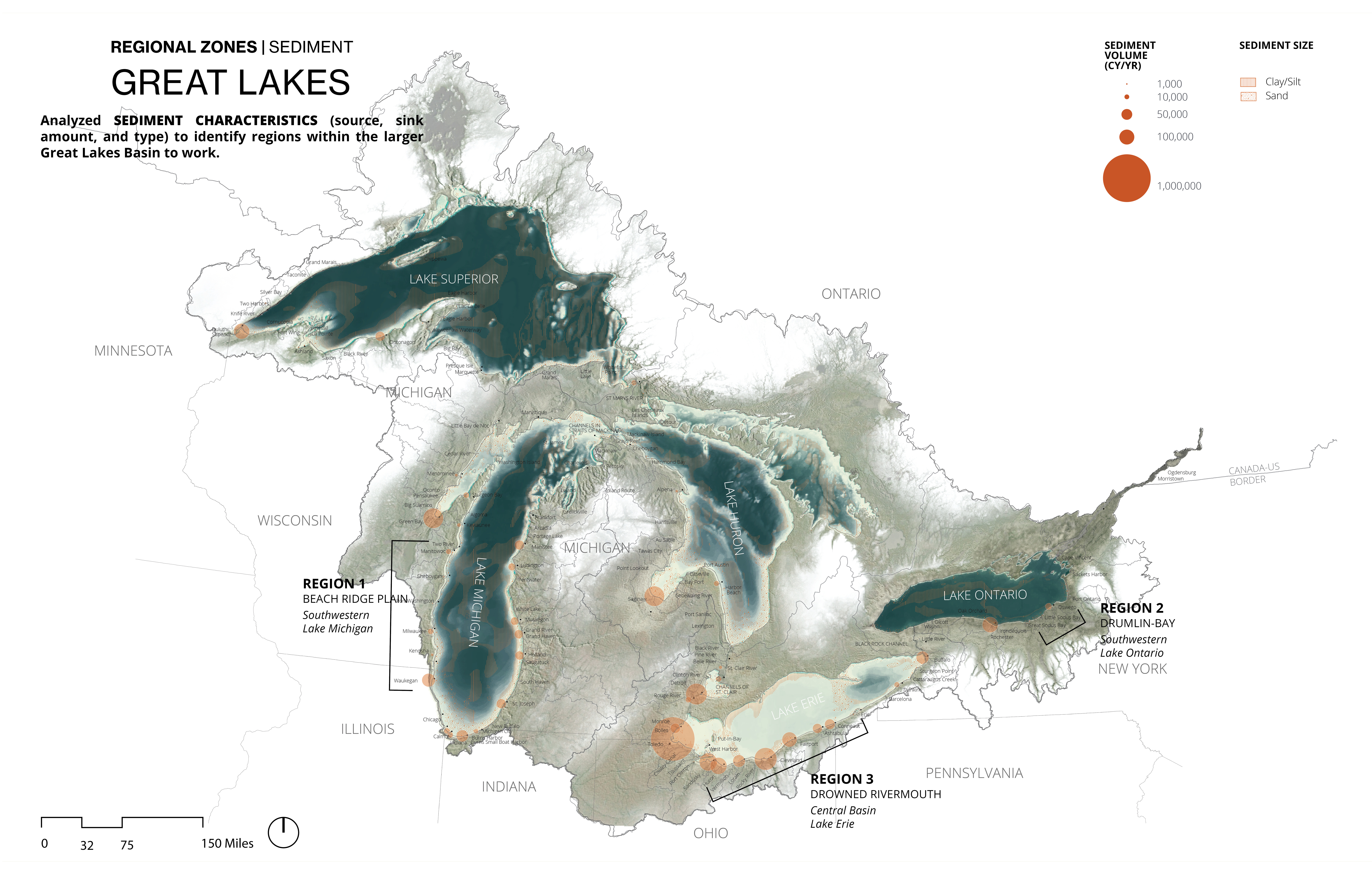 The Great Lakes situation is a harbinger of the effects of climate change on other coasts. Water levels are at historic highs across the basin, causing massive losses in property, public space, and habitat. But the situation is more complex than simply rising waters. Water level fluctuations have reached all-time record high and low levels in the past decade, increasing uncertainty in risk management, restoration, and coastal protection. Developing methods of planning and design that can address these unprecedented coastal conditions at scale is necessary given our reliance on these landscapes as residential, agricultural, recreational, ecological and industrial lands, and places of cultural and historical significance. Designing with sediment at a regional and local scale offers a way to re-imagine fundamental aesthetic and civic questions through landscape architecture.

We use analysis and planning to leverage forcing conditions to produce more desirable outcomes cultural and ecological outcomes from sediment projects. This requires an approach that integrates these forces and works over time, rather than merely defending against them. Landscape architecture is proving a highly effective discipline to manage such a process. It links the vast array of disciplines engaged in coastal design and can form synthetic links between the analysis, outreach, design, monitoring and response phases of a project. In our project this takes the form of a series of sensitive structures in three locations, informed by context and functioning over time.

In each case that follows the proposals developed are sensitive to regional and local environmental conditions, history, economy, and cultural values. This sensitivity is exhibited through both their engagement with environmental forces such as waves, wind, and emergent vegetation, but also as structures that have served to garner consensus and understanding about local sediment management alternatives through outreach, collaboration and continual revision. Planned for unprecedented contexts, sensitive structures both meet immediate community goals and serve as experimental tools for gaining knowledge about systems and how to adapt to new conditions and goals in the future.

The project began at the scale of the entire Great Lakes Basin. One of the key components of the analytical work was to establish the scope of intervention, and identify key partners and locations that demonstrated a range of forcing conditions, spanned the basin’s geography, and showed opportunity for larger-scale deployment. The goal was basin-wide impact through local intervention. Three of the sites chosen were the Port of Lorain, Ohio (Lake Erie), the recreational harbor of Port Bay, New York (Lake Ontario) and the coast of Illinois Beach State Park (Lake Michigan).

The geography around Port Bay in Northern New York consists of a series of coastal drumlin bluffs that slowly erode and transport sediment to the east by way of longshore transport. This sediment tends to create barrier sandbars that separate a collection of bays from Lake Ontario. In Port Bay, the community concerns included two separate-but-linked topics. The first was the annual dredging of the small channel connecting the Bay to the lake and what to do with this material. Typically the cobble-rich sediment was simply placed as close to the channel as possible– effectively the least-cost option. The second concern was that the barrier bar east of the channel that protects the bay from lake waves has frequently been breached in recent years. While this breaching is a natural process, the bar is struggling to recover over the last decade due to a lack of sediment.

Working with the State Department of Environmental Conservation, the Wayne County Soil and Water Department, the Port Bay Improvement District and the local dredging contractor, our project links the annual dredging to the potential of nourishing the barrier bar without increased cost to the community. This occurs by way of placing the material into a new drumline feeder positioned in the nearshore, below the water line. It reproduces the activity of the regional drumlins at the scale of annual dredging operations and human perception, and is intended to be quickly eroded by wave action toward the weakened sandbar. This process will begin in the summer of 2020 and will be monitored, allowing for necessary tuning in the form and location of the erodible bluff in the coming years.

The topographic feature that characterizes the Illinois Beach State Park is the beach ridge plain. This landscape is composed of a series of shore-parallel sand ridges with wetlands between them. The habitat created by the beach ridge, in particular the interdunal panne wetlands that develop between them, is incredibly rare and a priority conservation area for federal and state agencies. But as a dynamic system, the coastal conditions of the park are continually shifting, with a present-day net erosion on the north area of the park and a net gain in the southern area. This process is exacerbated by climate change and the increased intensity of storms that fuel the longshore transport process. As the landscape erodes, habitats that took thousands of years to develop are washed away in months or years.

Working the State Department of Natural Resources, the Illinois Geologic Service, the United States Army Corps of Engineers and the local Sand Management working group, our project identified the opportunity to extend the ridge-and-swale topography into the nearshore aquatic environment, creating a thickened coastal landscape that slows erosion without stopping longshore sediment transport while also providing aquatic habitat. Designed as a set of deformable underwater stone ridges, the proposal will attempt to provide sufficient wave reduction without the visual obstruction and high cost of emergent breakwaters. If successful, our project could reduce both the cost and visual impact necessary to protect this valuable habit.

The geologic story of the southern shore of Lake Erie is one of former lakebed sediments deposited during glaciation that have now become some of the best agricultural land in the state of Ohio. This silty agricultural land erodes into slow-moving rivers that enter Lake Erie at rivermouth towns that developed as some of the most productive industrial and manufacturing hubs in the country. One of the legacies of this industry is the loss of valuable wetland ecosystems. Because of the need for navigation, shipping channels are continually dredged and a new regulation in the State of Ohio has placed a moratorium on the open water placement of dredged sediments.

Working with the United States Army Corps of Engineers, The State Environmental Protection Agency, the State Department of Natural Resources and the Lorain County Metroparks, we proposed a series of porous wetlands made from dredged sediment behind a stone ellipsoid arc. In a state that has lost upward of 80% of its coastal wetlands, the development of a series of newly created coastal wetlands is seen by the state EPA as the most beneficial use of dredged sediment possible. The feature is partially open to wave forces, allowing for daily waves to shape the sediment into complex shoreline wetland, and for some sediment release into the adjacent nearshore during storms. In addition, these features will also serve as valuable recreational fishing locations and areas of refuge during lake storms. As a larger system, this collection of wetlands will create a protected and ecologically rich water-trail stretching from Lorain to Cleveland Ohio.

From Planning to Implementation

All of the projects included here are slated for construction in the near future and monitoring will follow. The construction of these experimental pilot projects is the product of intensive planning, analysis and outreach, in addition to productive collaborations with other institutions and stakeholders. The Sensitive Structures project by Healthy Port Futures represents an expansion of the agency of landscape architecture in coastal environments.