In 2016, the State of Ohio passed Senate Bill 1, a law that bans most open lake disposal of dredged sediment from federal navigation channels. Instead, the state is investing in and exploring alternative beneficial uses of the sediment, and in particular, its potential role for coastal wetland creation. In response state and federal stakeholders, including the Army Corps of Engineers Buffalo District and the Ohio EPA, have targeted strategic Ohio port communities, including Lorain, in which to design and build wetland habitat.

HPF was enlisted to aid in the site selection and conceptual design of a cost-effective and ecologically diverse novel wetland. To meet state and federal [stakeholder objectives, HPF developed a partially open-cell wetland created from the placement of dredged sediment– the Lorain Ring. The proposed Ring is an crescent-shaped sill-structure with a variable crest height that is open on the shore-side. It employs passive sediment management to create ecological complexity and maintain diversity while offering shoreline protection and the potential for recreation. The crest height and width as well as the extent of the sill is calibrated to the wave environment and varying water levels. Rather than positioning the wetland as something to be defended from the lake, the design allows for disturbances and the redistribution of sediment and seeds and rhizomes while still protecting selected areas.  This concept encourages wetland establishment while allowing for a range of occasional disturbances to create complexity.  Throughout this process, HPF utilized physical modeling, computation modeling by AnchorQEA, speculative drawings, stakeholder meetings, historical research, site photography, and wetland reference sites to advance the concept, refine the design, and calibrate it to Lorain.

Historically, wetlands encircled Lake Erie, providing important spawning and flyover habitat, sediment management, nutrient processing, and flooding mitigation. These wetlands typically establish in wave-protected areas; embayments, rivermouths, and barrier/spits. However, the majority of these coastal wetlands have been lost to industrialization and development.

In particular, Lake Erie’s central basin, port landscapes have replaced the historically-supported drowned rivermouth wetlands, leaving only two established coastal wetlands along the 120 miles of shoreline between Huron and Conneaut.

Lorain serves as a typical example of a rivermouth wetland system that developed into a port city. Through the layering of historical maps (see below), alterations in the riverine and nearshore system can be seen, including shoreline hardening, wetland loss, nearshore erosion, and solidification of the river channel. These development changes have altered the ecologic, hydrologic, and geologic dynamics in the riverine/nearshore area, resulting in a massive decrease in sediment transport, nearshore scouring and erosion, and habitat loss and connectivity.

Coastal wetland loss and nearshore sediment starvation can be partially mitigated through sediment management, but sediment placement and wetland reconstruction at large scales demands an innovative, cost-effective approach.  Prior sediment management practices have now been deemed either are too expensive or too wasteful to continue.  Past practices either placed the sediment confined in CDFs or unconfined in the deep open water. Both practices remove the sediment from the nearshore system, preventing its potential use in coastal protection, habitat creation, wave attenuation, and sediment nourishment. However, both approaches can inform a new hybrid system that might draw from both strategies of containment (as in a CDF) and cost-efficiency of non-containment (open lake disposal).

As represented by the state and federal stakeholders, the purpose of this project is to design and construct a cost-effective and ecologically- complex novel wetland utilizing dredged material. In order to satisfy both of these primary objectives, HPF proposed the Ring; a crescent-shaped, partially open- cell wetland design.  The lakeside crest allows for both wetland establishment and occasional stochastic disturbance events.  The shoreside opening of the crescent encourages important hydrological and ecological connectivity to the nearshore environment.

Our sensitive structure approach balances the need for hydrological, ecological, and recreational wetland-nearshore connectivity with the wave protection essential for habitat establishment.   Aesthetically, the simplicity and elegance of the crescent evokes the experience of the lake rather than detracting from it, as some hard structures can.  Recreational opportunities such as fishing and kayaking, can occur in the shallow, protected waters of the wetland. Hydrologically, the open cell can act as a feeder to the nearshore, imitating the rivermouth process, and allow for some sediment and seeds from the established wetland to winnow out of the cell over time.  Adaptively, this allows for the potential of additional dredge placement cycles into the cells. Ecologically, the open cell allows for increased aquatic habitat connectivity between the wetland and lake. The Ring has the opportunity to re-envision a novel way of sediment management, bridging the gap between containment and non-containment strategies by creating a wetland machine that might contribute to a healthier nearshore environment beyond its boundaries. 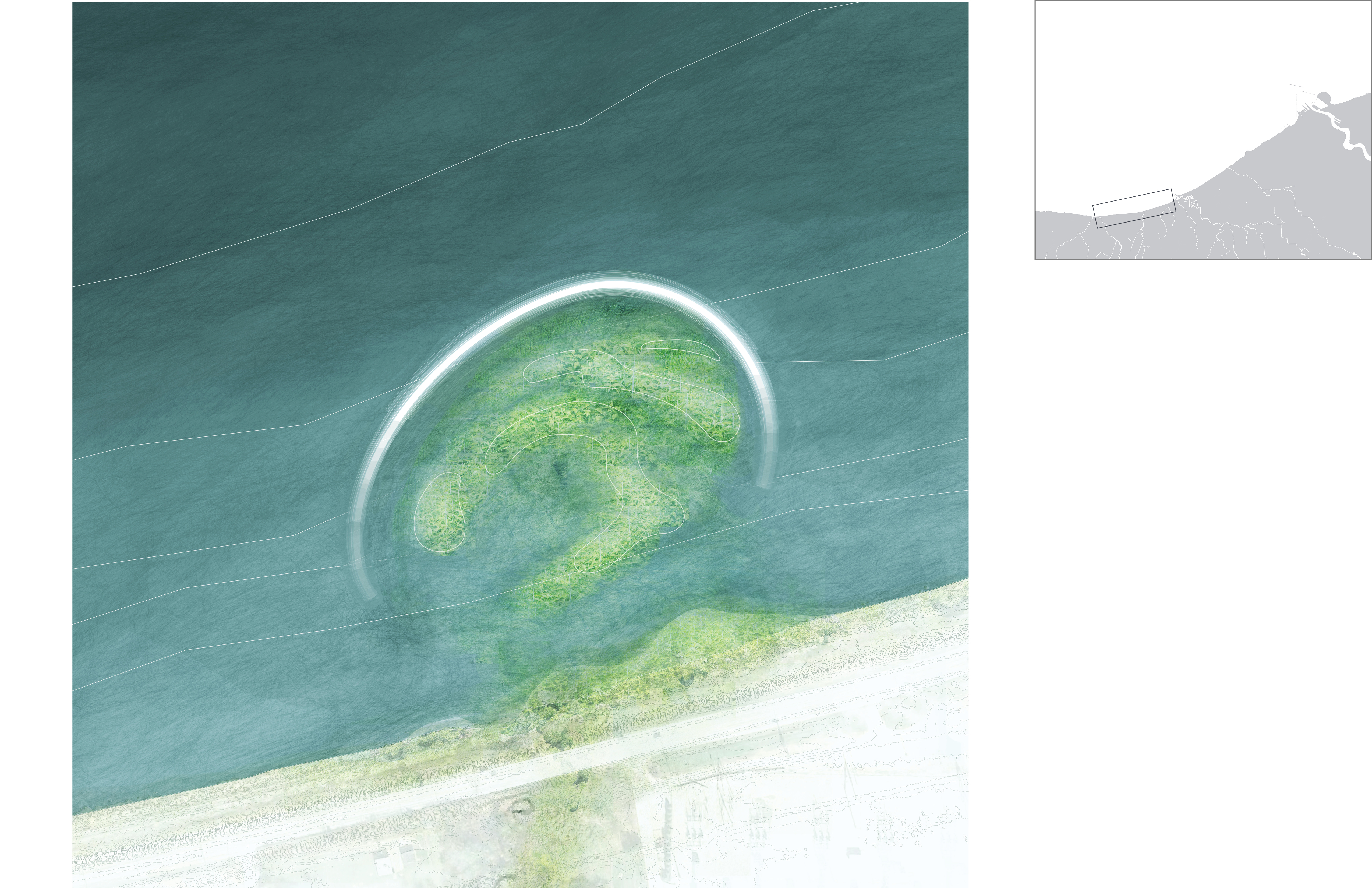 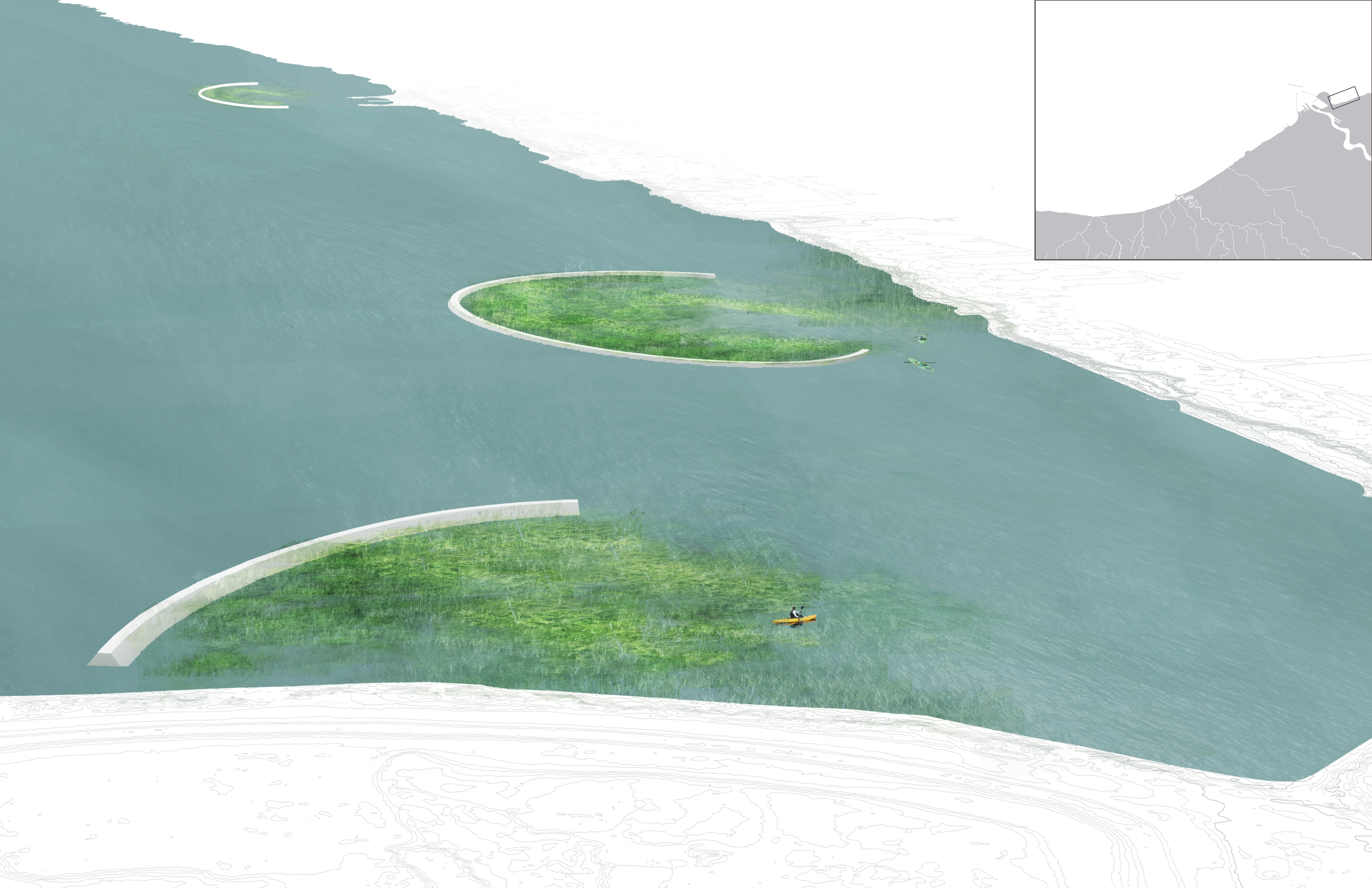 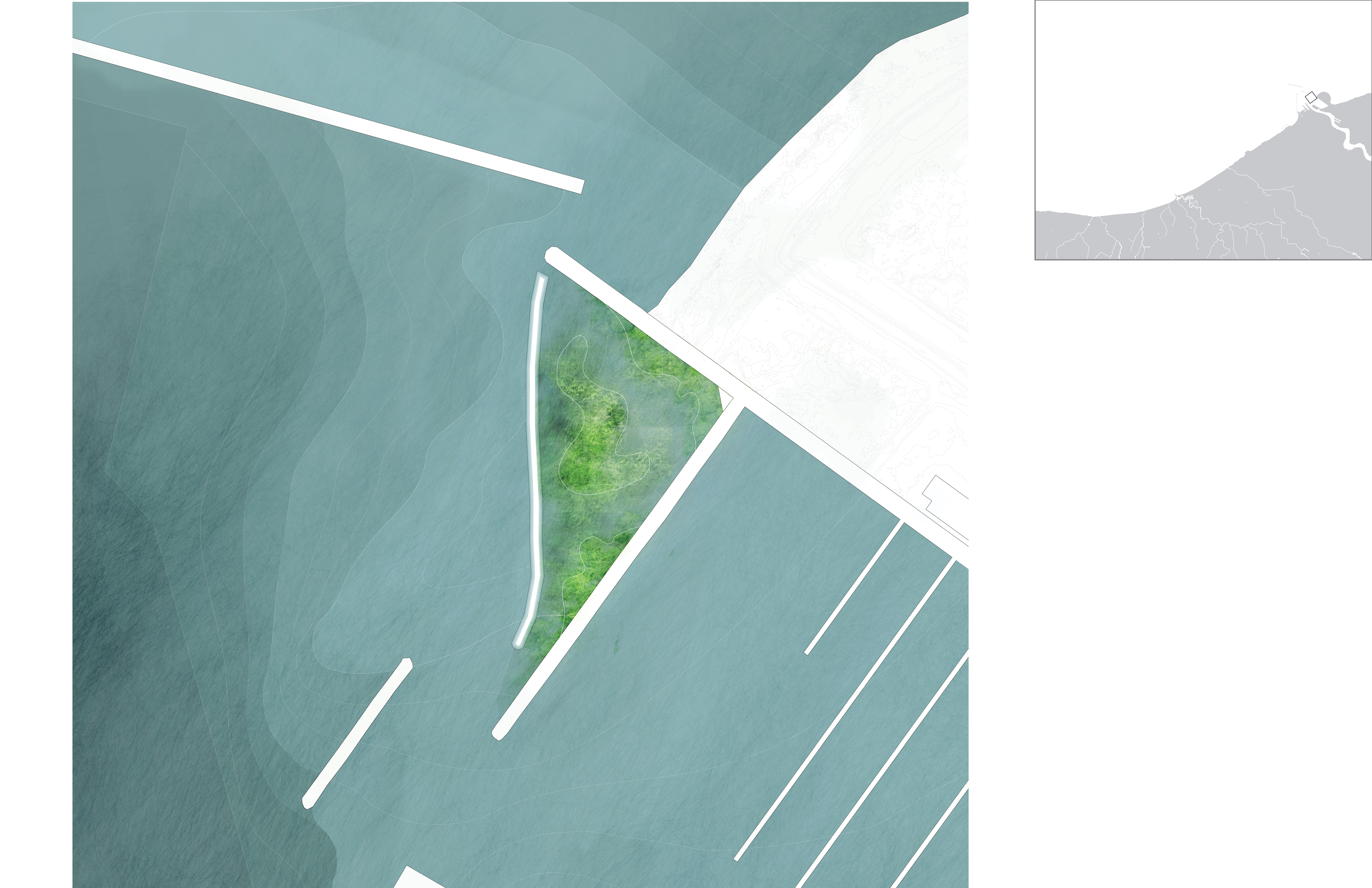 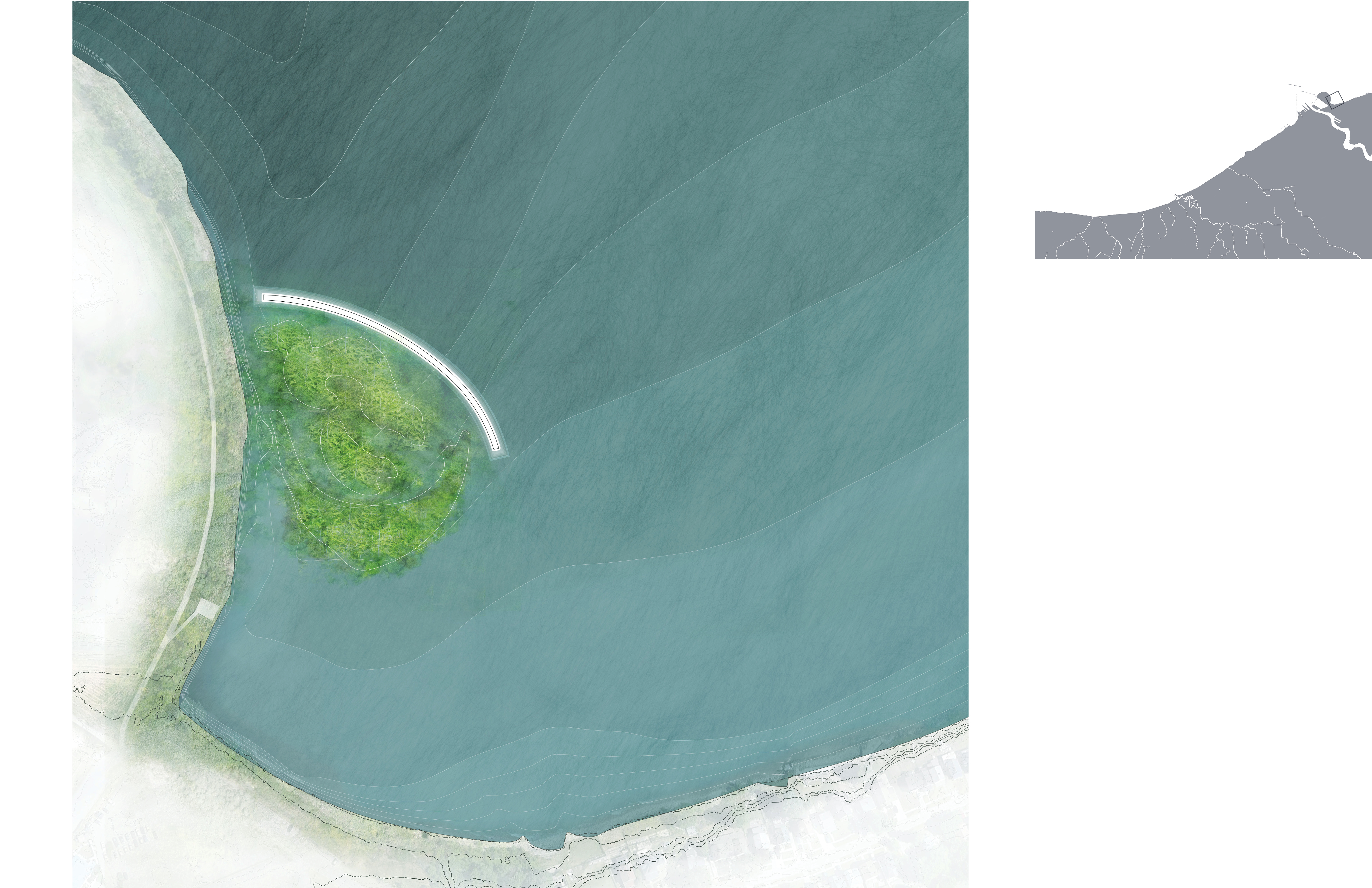 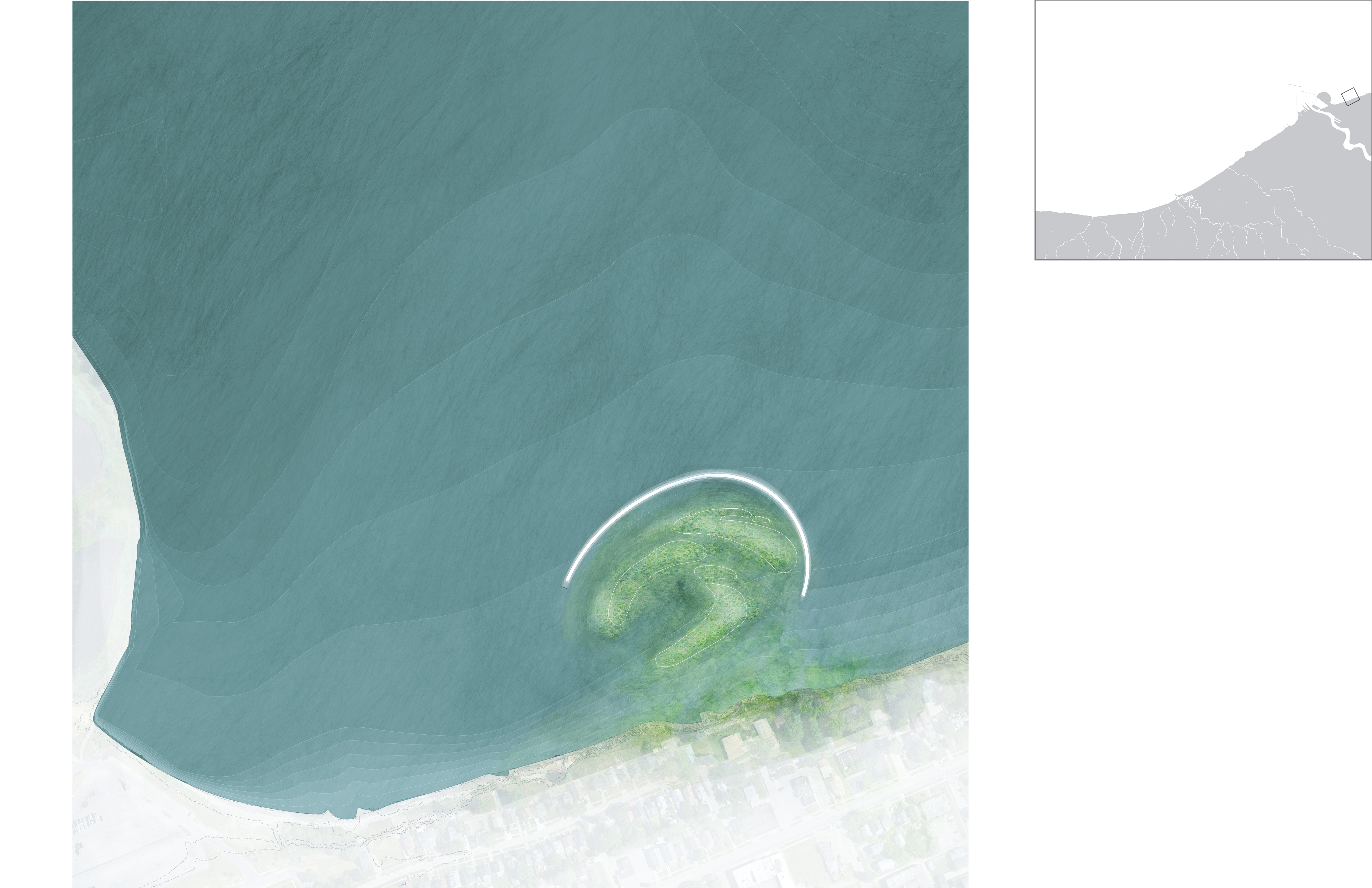 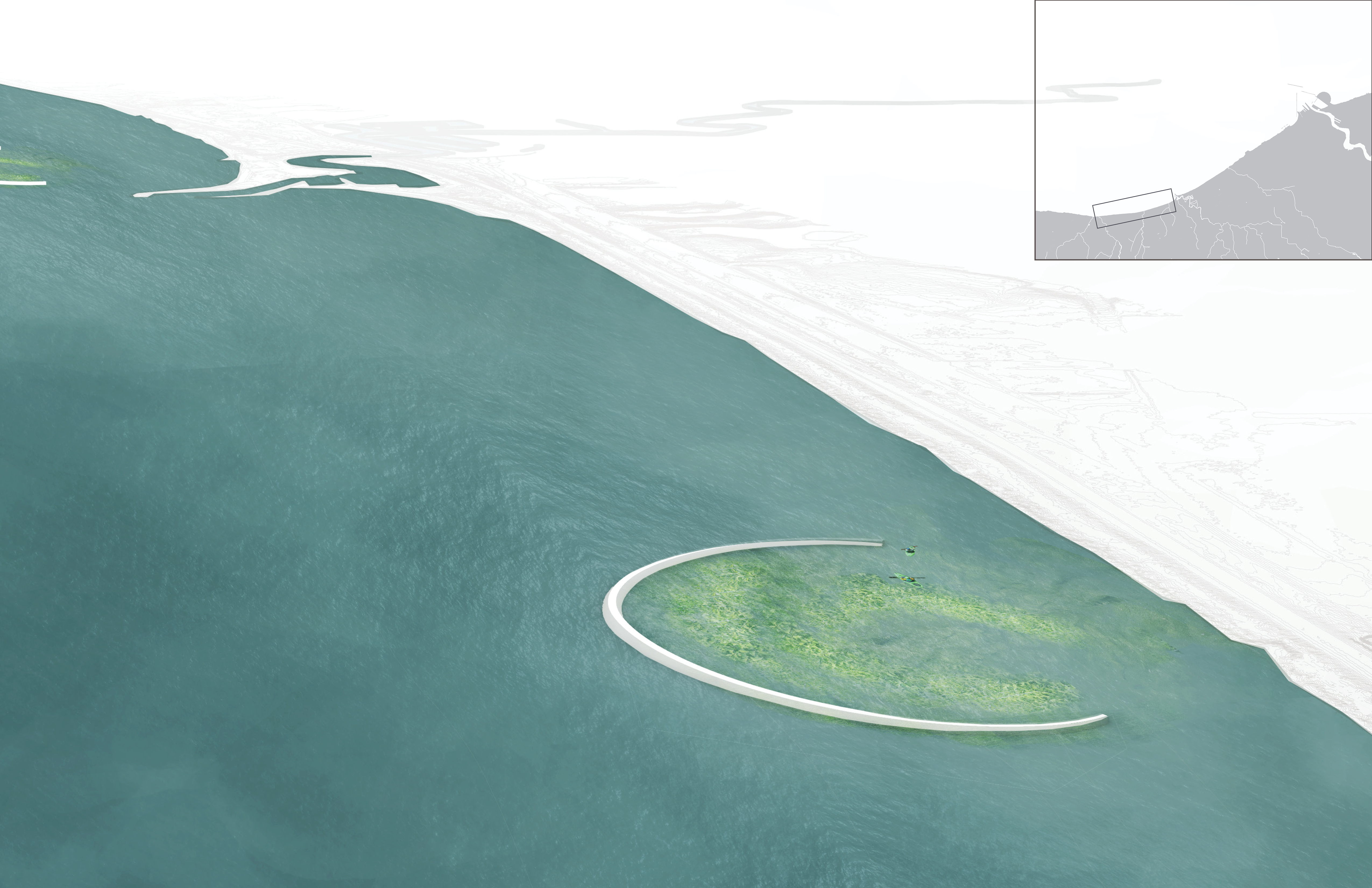 Potential sites were explored during site feasibility: These sites were considered because of public ownership, close proximity to the navigation channel, existing supplemental wave protection, and potential recreational and ecological connectivity. Even with these shared characteristics, the selected sites are quite variable, and represent a range of coastal-port landscape typologies.  These sites vary in type and amount of wave protection, ease of construction, range of public access, and potential for ecological connectivity. Ultimately, these differences will inform selection and design

The crescent cell is designed to be adapted to different environmental conditions and desired outcomes while optimizing for four variables: minimizing stone used in the sill structure, maximizing sediment placed, maximizing wetland surface area, and allowing for variable protection. While a circle maximizes the ratio of surface area to perimeter in the abstract, on the sloping bed of the Lake Erie it becomes cost prohibitive to build in deeper water. The circle is flattened into an oval with the maximum depth between ten and twelve feet below LWD, according to parametric studies that optimize for the four variables. The back of the oval is then removed along the shoreline, allowing for water and energy inputs, forming a crescent. And the axis of the crescent is then rotated so that the highest crest height remains along the edge where the highest waves come from, and the edges can slope gently at a slope of one foot down every one hundred feet across.

The Ring can be altered to hold different amounts of dredged material, to protect against various predominant wave directions, to support different wetland habitat types, and used in tandem, to create increased wetland complexity. The height of the armored structure can be calibrated to the wave conditions; and the desired disturbance periods. The structure is designed to slope down in order to provide the most protection in the direction of the prevailing waves, and decreasingly less, from other directions. The crescent can be built to accommodate a range of dredge volumes.  The cell may be used individually, or in tandem with additional cells if various starting topographical heights are desired. 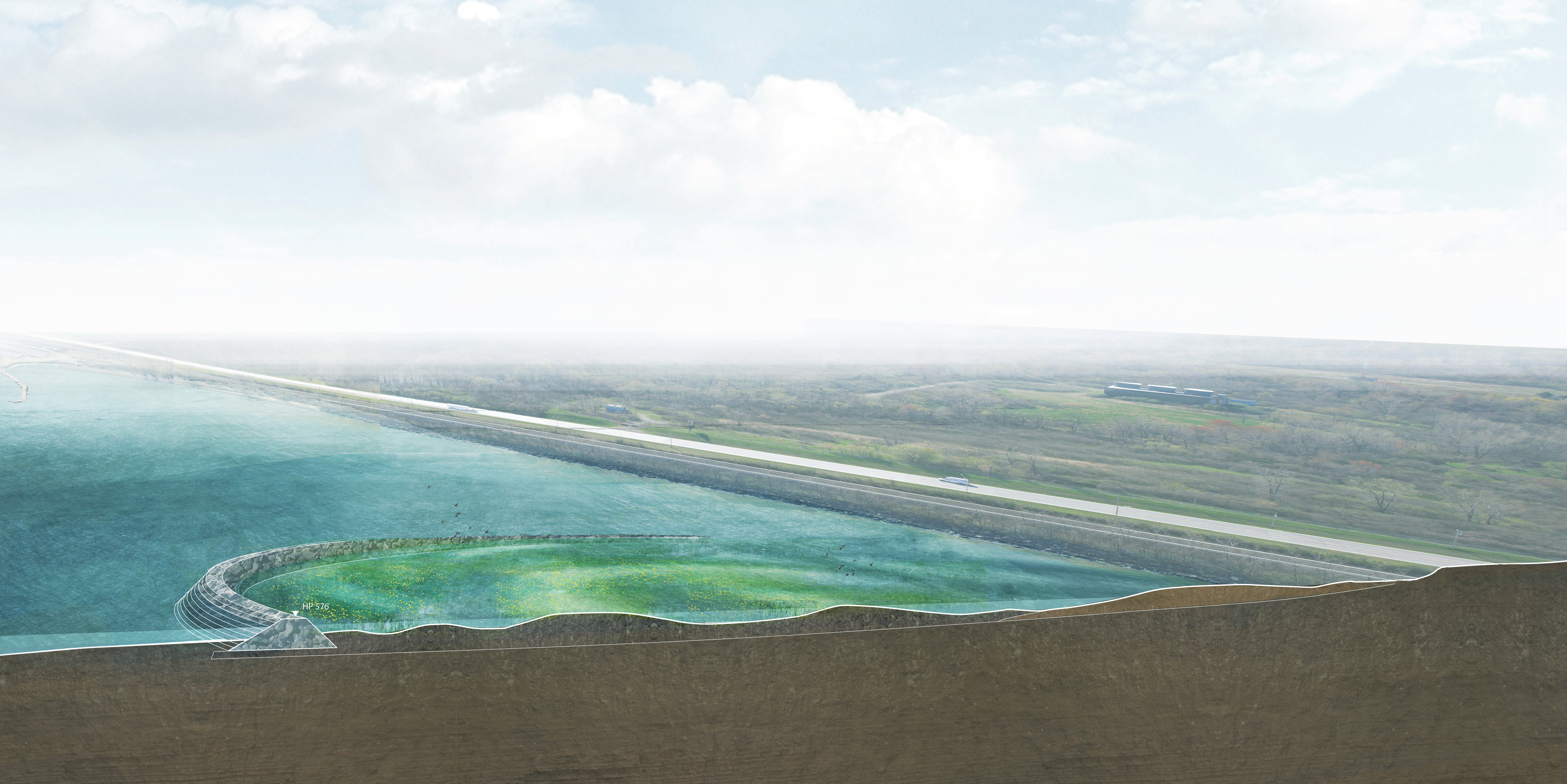 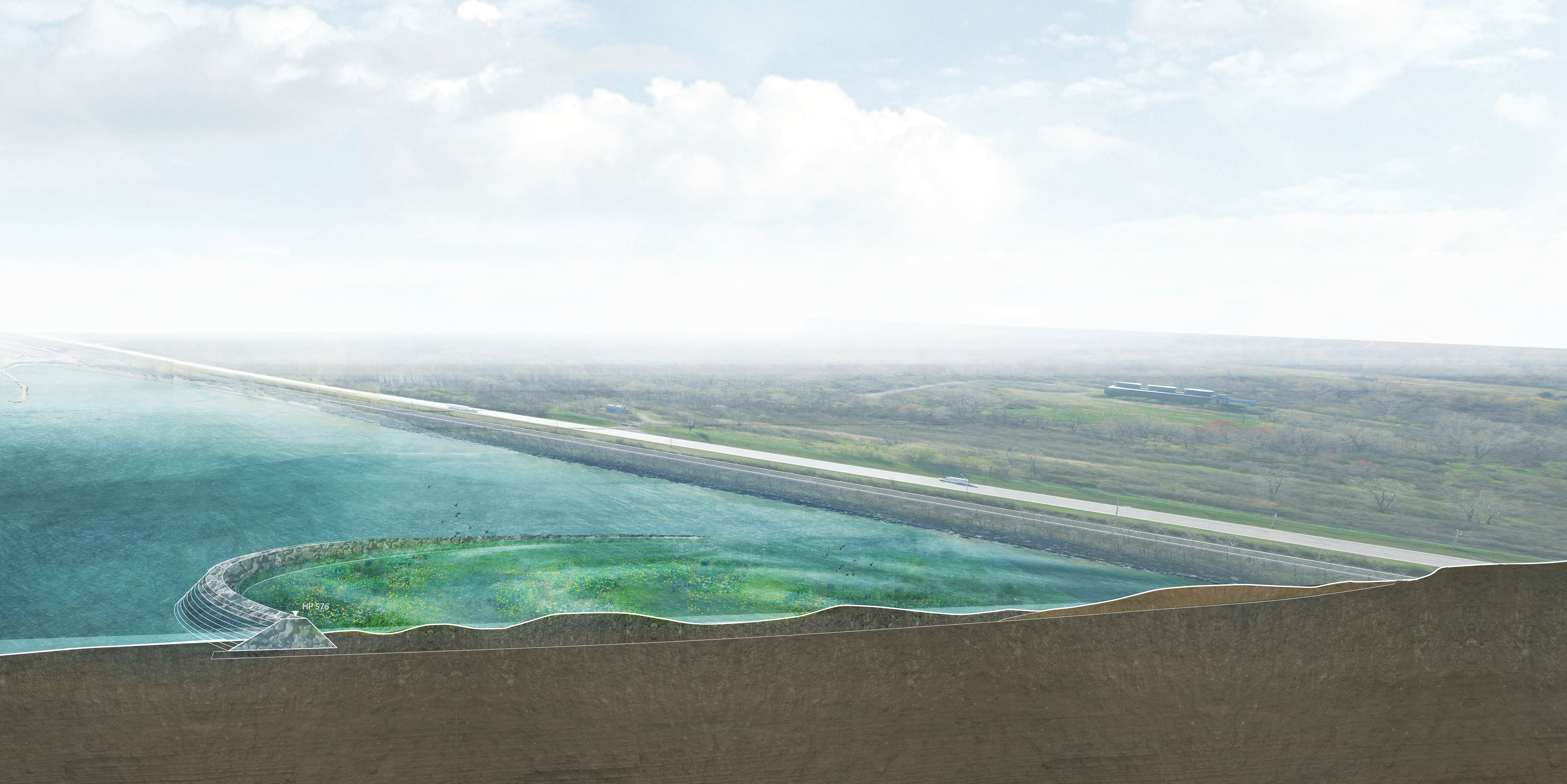 The sill structure crest height is calibrated to its wave environment.  It is designed to balance the protection against daily waves necessary for wetland establishment and sediment retention, with stochastic wetland complexity created from occasional disturbance from storm waves.  Disturbance events are intended to create complexity both through the deformation of the placed sediment and through occasional disruption of potential monoculture vegetative growth.

Throughout this process, a range of questions, varying from conceptual to specific, quantitative to qualitative, were asked.  From the initial question of “What form allows for the cost-effective construction and establishment of a complex wetland” branched:

A suite of tools and methodologies were developed to explore the above questions.  These tools included physical modeling, computational modeling, process drawing, stakeholder meetings, and reference wetland monitoring. The knowledge built upon itself: as the information garnered from one method, helped informed another.

What form allows for the cost-effective construction and establishment of a complex wetland?

Physical modeling helps to quickly explore and iterate forms under set conditions and within certain limitations.  HPF iterated forms comprised of similar stone and sediment volumes, and then observed its comparative performance within a set wave environment.  These designs were tested for their performance, namely resiliency and complexity under series of daily and storm conditions.  Resiliency and complexity were determined by amount of sediment retained after storm conditions and amount of topographic variation created, respectively.

Through this iterative process, HPF developed a partially-enclosed crescent structure.  This structure was able to contain the majority of sediment under daily condition, re-establish after storm conditions, and allowed for occasional disturbance.   Additionally, this form was considered because of its adaptability: its ability to be scaled, stretched, and used individually or in concert.

How does form placement and height impact the resultant wave height and frequency at the wetlands?

After generating a simplified form, HPF collaborated with AnchorQEA to test its performance at one of the selected Lorain sites.  HPF sited and scaled the form according to the wave and bathymetric conditions, and necessary sediment capacity.  For this model run, HPF tested a design that used several crescent forms with varying sediment elevations, structure heights, and rotations.  AnchorQEA developed a series of computation models that tested the design impact on wave heights under varying water levels, and wave conditions.

How to conceptualize and specify the expected range of potential resultant wetland morphologies?

This speculative tool was informed from previous observational and quantifiable results from physical modeling, computation modeling, and similar wetland sites.  It visualized variations of wetland morphologies, and helped conceptualize these possibilities over a period of time, through cycles of disturbance and re-establishment.  Beyond providing a framework to visualize the range of potential wetland morphologies, it also catalyzes discussions around expectations and assumptions. What is acceptable range of wetland morphologies? What is the timeframe for these morphology changes to occur? What is the tolerable amount of risk that the project falls out of this range? These speculative drawings can help facilitate discussion around the concepts of permanency and uncertainty in the project.

What site best takes advantage of this form’s characteristics while mitigating any of its potential liabilities?

HPF aided ACE-Buffalo District with their stakeholder meeting held in October, 2019.  Some of the questions posed were; What is the level of comfort with this open-cell form? What are the potential associated benefits and problems of this open-cell wetland?  Where is the best site to connect to potential ecological and social assets, and avoid any disadvantageous conflicts? 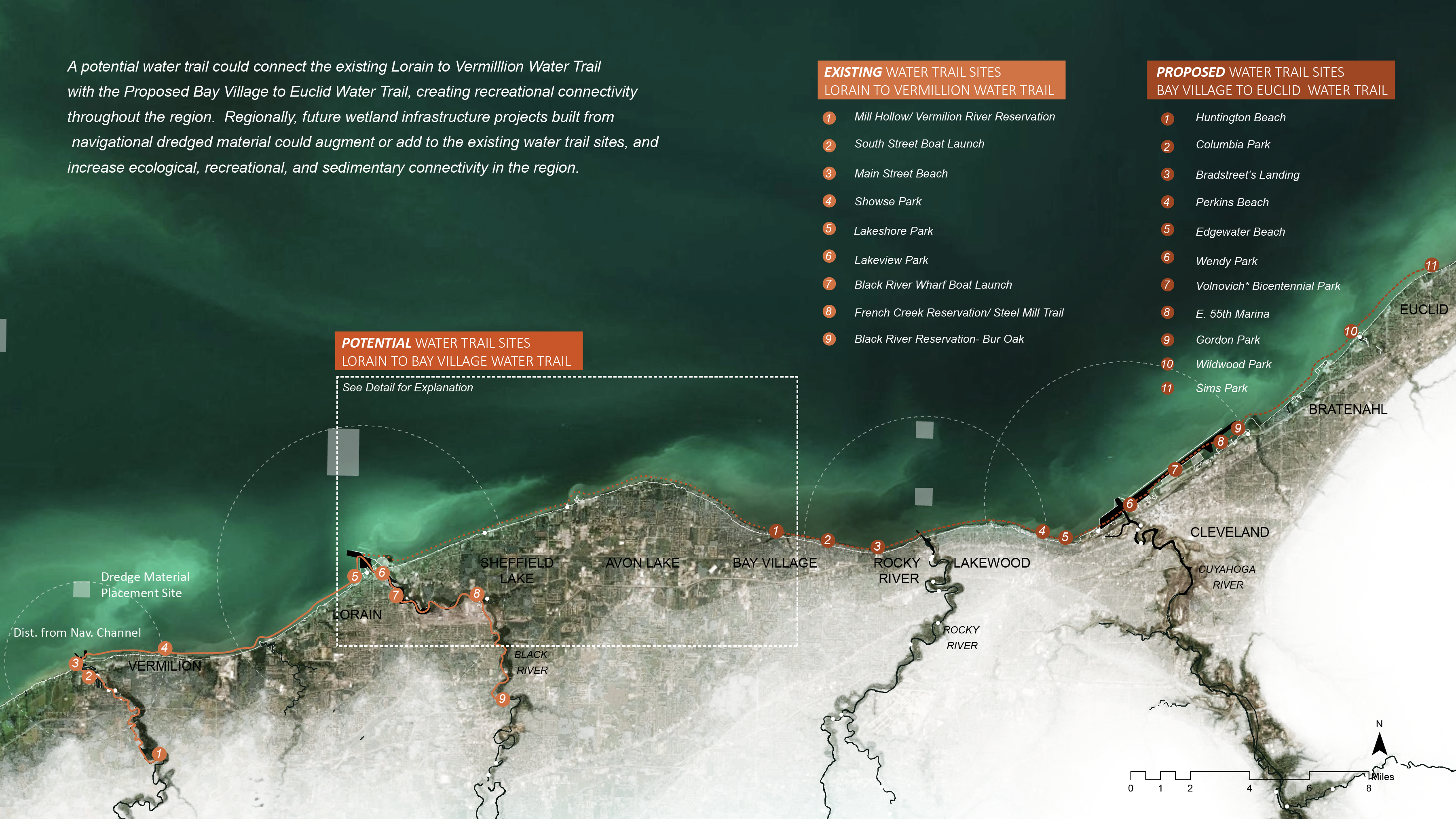 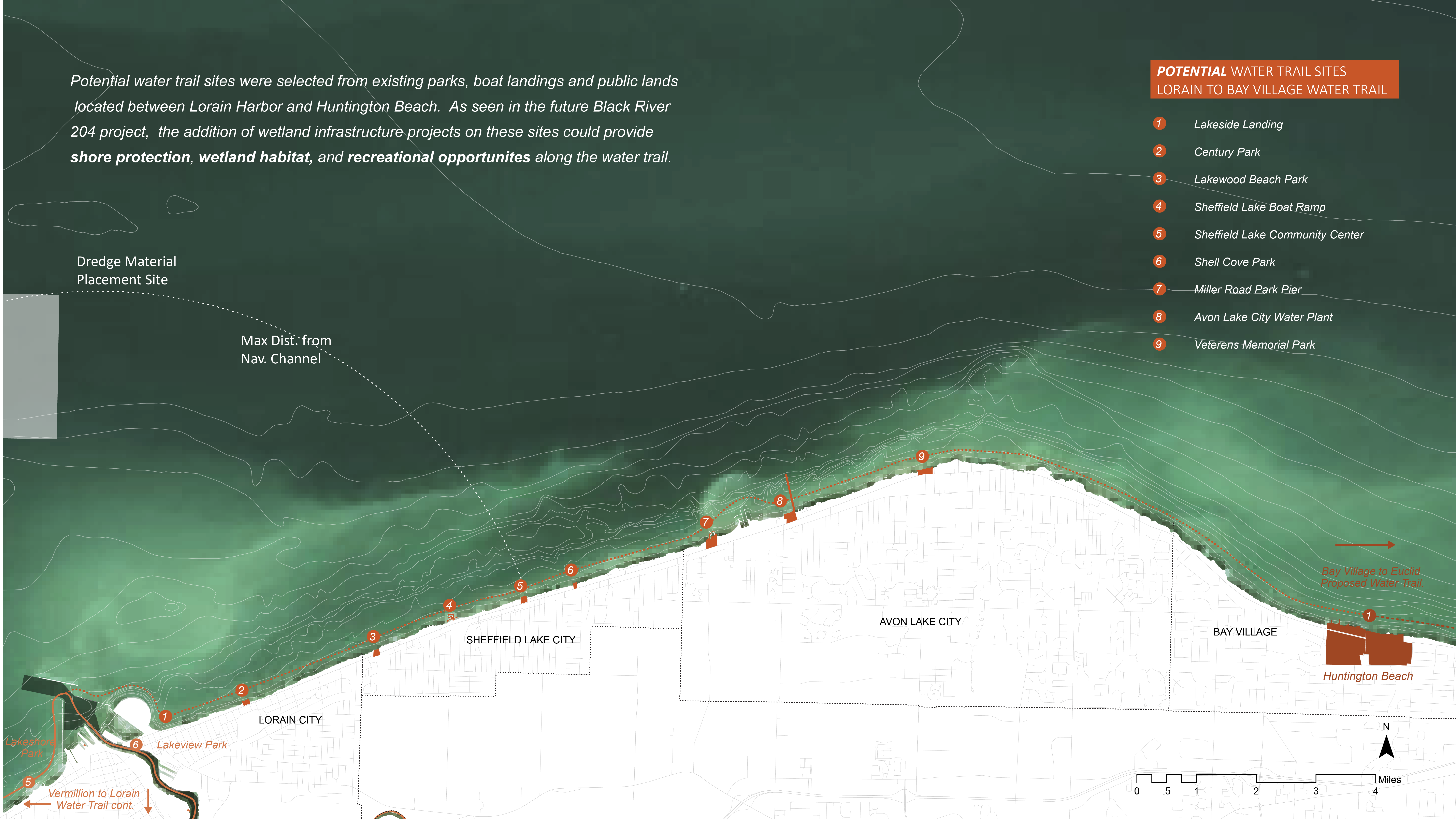 Consequently, Lorain, and several other Ohio port cities, have been awarded with funding under section 204 to build wetland habitat with dredged material.  This series of projects will provide the testing grounds to explore new methods to maintain sediment in the nearshore, as well as provide the opportunity to explore expectations for permanence and certainty. If built as conceived as a partially-open system, this project will be able to build upon the knowledge generated from co-existing 204 projects to inform future projects, and potentially serve as a new model of sediment use that restores lakeshore wetlands within the project bounds and improves the nearshore environment in the region.